Full Name
Domanique Grant
Job Title
Singer/Songwriter, Ontario
Speaker Bio
Named one of BUZZFEEDS top 20 artists’ to watch, DOMANIQUE GRANT is amongst a new generation of artists whose music is going viral for its ability to spread light and inspire authenticity.

CTV National called Domanique Grant’s single Till We See The Sun, the Anthem of our time, after a clip of the young artist performing in the streets of Toronto, during lockdown, ended up circulating on news networks around the world.

Domanique was featured in a campaign during the 65th Grammy Awards, the largest global night in music, which highlighted some of the top emerging Canadian artists in partnership with RBC #firstup. Domanique’s music has been featured by L’Oreal Paris, Unilever Brands (Dove, Shea Moisture). Domanique’s live performance has sold out a TEDx Talk and been featured on the Pepsi World Aids Day stage for over 40,000 people in Uganda. DOMANIQUE has appeared in the Pan American Games opening ceremonies for over 1 million people. She is also amongst a small group of global artists that has been invited to perform for the Prime Minister of Canada and The United Nations. 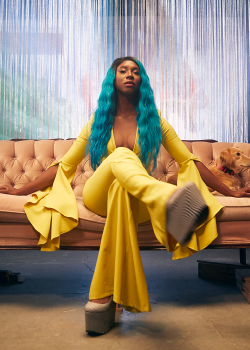